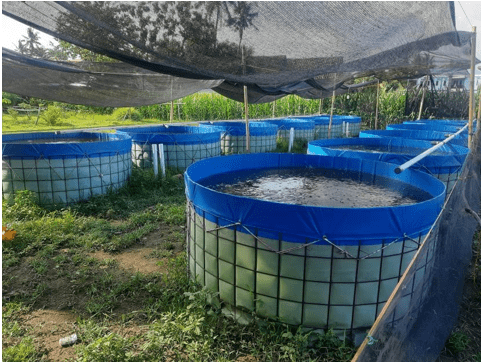 Pokdakan (Fish Farmer Group) MDS located in Dusun Kadisoro, Gilangharjo Village, Pandak District,  Bantul Regency. Pokdakan MDS was established in 2019, manages 90 ponds built on a village treasury area of 5,100 m2. The main focus for Pokdakan is the catfish culture. To support the fulfillment of seed needs, currently some members are engaged in catfish hatchery business. In 2020 the Aquaculture Study Program together with the Fisheries and Marine Affairs of Bantul Regency have established the MDS Pokdakan as one of the centers for the development of area-based fish cultivation in Bantul. The release of the MDS Pokdakan as a development group was carried out on August 11, 2020, along with the facilitation of feed assistance as revolving capital.

The biggest problem is the insufficient availability of catfish seeds. To overcome this, Pokdakan is required to be able to carry out on-farm catfish cultivation in an integrated, starting from hatchery, nursery, to culture. To support the plan, several activities that need to be carried out are business segmentation (seeders, breeders, and breeders), implementation of a culture system with probiotics, and cultivation of tubifex worm to support hatcheries. Especially for worm cultivation, the mentoring program by the Aquaculture Study Program has produced results with the approval of two production facilities assistance packages (bansarpras) by the Directorate General of Aquaculture at the end of 2020.

Currently catfish become the main commodity in MDS. Most of the members are doing catfish culture and some are working on catfish hatcheries. Based on the catfish supply chain system that developed in Pokdakan, the seeds produced by the hatchery members are distributed to the supervisory members. However, up to now, seed production from members has not been able to meet the needs for all MDS member. As a result, the officials were forced to bring in catfish seeds from outside, both from within and outside the Bantul Regency. This condition is very unfavorable because in addition to being more expensive, the seeds that come are often of poor quality. This often results in the number of deaths and growth that is less uniform, both at the nursery and rearing stages.

To overcome the problems above, Pokdakan MDS plans to increase the production capacity of catfish seeds. So far, the catfish hatchery has only been carried out by three hatchery members, which in total have around 150 broods. Preparatory efforts have been made by Pokdakan, among others, in 2019 bringing in 75 prospective catfish brooders from BBPBAT Sukabumi. In the near future this prospective parent has become a parent ready to be spawned to produce seeds. This effort will soon be followed by the development of a catfish nursery unit. Thus, in the future, a more comprehensive catfish supply chain system will be created which includes: (1) hatchery business (spawning broodstock and rearing larvae to produce at least 1-3 cm of seed), (2) nursery business (maintaining seeds of at least 1-3 cm). cm to produce 7-9 cm of fry), and (3) enlargement efforts (maintaining 7-9 cm of fry until consumption-sized fish are produced).

To realize the above plan, the Aquaculture Study Program has developed a catfish nursery unit by providing facilities for 6 round tarpaulin tanks with a diameter of 2 m. This effort was followed by Pokdakan which independently also built 4 similar tanks, so that in total there were 10 round tarpaulin tanks for nursery catfish seeds. This catfish nursery unit is equipped with a well as a water source, a water pump, as well as irrigation and drainage. 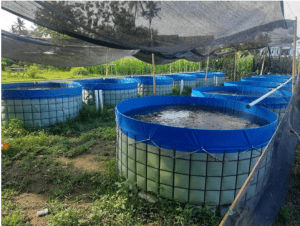 So far, hatchery members who have succeeded in producing catfish seeds often face problems related to the availability of natural food (tubifex worms) for larvae/seeds. Breeding members usually get worms from traders who collect worms from catches in nature. The existence of worms is now increasingly rare and the price is increasingly expensive, especially during the rainy season when members of the breeder actually need them in large quantities. This resulted in low catfish seed production and in the end disrupted the provision of seeds for members of the authorities, so that members of the authorities were forced to bring in seeds from outside with higher prices and less guaranteed quality.

To overcome the problems above, it must be strived for worms to be available at any time. In 2020, the Aquaculture Study Program succeeded in assisting the MDS Pokdakan, so this Pokdakan received Tubifex Worm Infrastructure Assistance (Bansarpras) from the Directorate General of Aquaculture, Ministry of Marine Affairs and Fisheries (KKP). Through the Bansarpras, Pokdakan is expected to be able to independently cultivate worms, so that Pokdakan is able to meet the needs of seed members, especially for catfish. Currently Pokdakan is also pioneering the development of carp hatchery and ornamental fish cultivation, so that the production of worms is also expected to be able to provide the needs for these two commodities. If the need for worms in the Pokdakan area can be met, the excess production will be distributed to the community in Kadisoro, Gilangharjo Village, which is a community of ornamental fish cultivators. Thus, this effort is also expected to be able to support the policy of Gilangharjo Village which will make Kadisoro Hamlet a center of cultivation and “minatourism” as part of the development of the minapolitan area of ​​Pandak District.

Currently, tubifex cultivation has been carried out by the MDS Pokdakan. However, production in the first cycle is still not optimal. This is partly due to the poor preparation of the media and the provision of nutrients for worm. In the second cycle, the Aquaculture Study Program facilitated the cultivation of worm by providing seeds. 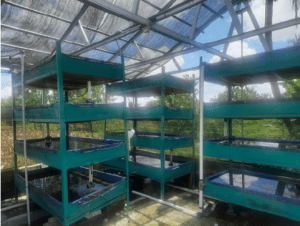 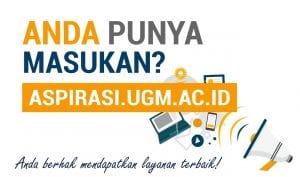 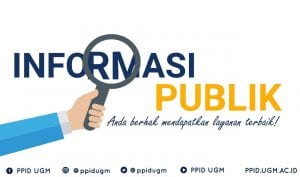